LANDBANK is recognized by various award-giving bodies for its products, services, and CSR activities 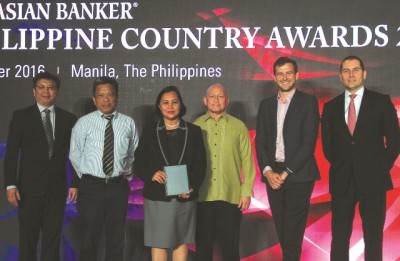 LANDBANK Officer-in-Charge Cecilia C. Borromeo accepts the “SME Product of the Year” award for the Bank’s BUILDERS loan program. With her are (from left): The Asian Banker Managing Director Foo Boon Ping, LANDBANK Executive Vice President Julio D. Climaco, Jr., LANDBANK Senior Vice President Edward John T. Reyes, Startupbootcamp FinTech Co-Founder and Global COO Markus Gnirck, and FinFabrik CEO Alex Medana. LANDBANK’s BUILDERS program was awarded “Best SME Product” at The Asian Banker’s Philippine Country Awards 2016. The awards ceremony was held in conjunction with the Philippine International Banking Convention at the Shangri-La at the Fort, Bonifacio Global City. The Bringing Urbanization and Innovations thru LANDBANK’s Diverse Engineering Resource Support or BUILDERS program provides business loans to SMEs in the local construction market. It forms part of the Bank’s contribution to the Public-Private Partnership projects of the national government by extending credit support to private and public sector players in the industry. “This award is an affirmation of what we at LANDBANK are doing to help the SME sector and other major development players, whom we consider as allies in promoting economic growth. Through the BUILDERS program, we help contribute to the government’s thrust to promote inclusive growth through infrastructure development and also help create jobs in the process,” said LANDBANK Officer-in-Charge Cecilia C. Borromeo. Launched in 2014, the program crossed the billion-mark just a year after it was launched, with the bank’s SME loan book and deposits recording double-digit growth in the same year. As of June 2016, the program generated roughly one-third or 29% of the outstanding revenue of the Bank’s SME business with loan releases amounting to P19.6 billion lent to 230 contractors. This helped fund various projects, including farm-to-market roads and bridges, telecommunications infrastructure, residential units, commercial buildings, sanitary landfills, water and sewerage systems, sea walls, among other development projects. The Asian Banker Philippine Country Awards recognizes the most outstanding financial products, services, and organizations in the country and forms part of the prestigious awards programmes ran by The Asian Banker, covering the full spectrum of topics and areas that constitute the financial services industry. LANDBANK also bagged both the first and second places in the inaugural Talent Bank Philippines 2016 held as part of the Philippine Country Awards. The LANDBANK Operations Sector Chorale got the top prize with their all-original a cappella arrangement. They will be representing the Philippines to compete in the Talent Bank Asia at The Asian Banker Summit 2017 in Singapore.  The LANDBANK Got Talent All Stars with their modern hip-hop rendition of traditional Filipino dances meanwhile won second place. Talent Bank Asia is a new initiative launched by The Asian Banker this year to bring together and recognize the creativity and talent of people in the financial services industry.

For the fourth year in a row, LANDBANK was recognized by the Global Sustainable Finance Network (GSFN) for its contributions in the field of sustainable finance. The Bank was conferred with a Certificate of Merit for its Climate SMART (Synergistic Mitigation, Adaptation, Resiliency, and Transformation) financing program under the Best Innovation in Sustainable Financial Products and Services category. The award was given in a ceremony held at the annual Global Sustainable Finance Conference in Karlsruhe, Germany. Read More

The Asia Pacific Quality Organization (APQO) has named LANDBANK as one of the winners in the prestigious Global Performance Excellence Awards (GPEA). The Bank received the Quest for Excellence Award, the third highest award under the Non-Profit or Government Entity category. It joins 29 other organizations from ten Asian and Pacific Rim Countries who were recognized as “exemplary companies of world class quality performance”. LANDBANK was nominated by the Development Academy of the Philippines to participate in GPEA, following its conferment of the Level-2 Recognition for Proficiency in Quality Management from the Philippine Quality Award. The Bank was recognized for having demonstrated effective and systematic approaches to the overall requirements of the globally-accepted business excellence framework. “We are honoured and grateful for this prestigious recognition, which affirms LANDBANK’s commitment to quality management and business excellence. This award inspires us all the more to intensify our efforts to continue building a culture of excellence that translates to world class performance, and serve as role model for other organizations across countries,” said LANDBANK OIC/Executive Vice President Cecilia C. Borromeo. Now on its 16th year, the GPEA is an international recognition of national quality award recipients based on the Baldrige Criteria Framework of the Malcolm Baldrige Quality Award (American Quality Award).  Assessments are done by trained Baldrige examiners and consultants of Fortune 500 corporations. LANDBANK is the only Philippine bank and the only government entity that made it to this year’s roster of winners. The awards will be presented at the 22nd APQO International Conference on Quality in Rotorua, New Zealand on November 20-23, 2016. APQO is a non-profit organization that was founded and organized in 1985 by National Quality Organizations in Asian and Pacific Rim countries to be a primary mover for quality and continuous improvement for goods and services and quality of life in the Asia Pacific Region.

Asian Bank of the Year

LANDBANK First Vice President/Corporate Affairs Department Head Catherine Rowena Villanueva (4th from left), together with LANDBANK Countryside Development Foundation, Inc. (LCDFI) Executive Director Butch Garcia (2nd from right), received the ‘Kampeon ng Katubigan’ awards from Maynilad President & CEO Ramoncito Fernandez (leftmost) and National Water Resources Board Executive Director Sevillo David Jr. LANDBANK recently received two “Kampeon ng Katubigan” awards for championing programs for water access and environmental sustainability. Maynilad Water Services (Maynilad) and National Water Resources Board (NWRB) conferred the awards for LANDBANK’s environmental programs – Manila Bay SUNSET Program Partnership and Adopt-A-Watershed Phase II – at the second World Water Day Awards. Manila Bay SUNSET Program Partnership is LANDBANK’s flagship environmental program, created to implement a sustainable approach to protect and conserve the Manila Bay – considered one of the best natural harbors in Southeast Asia. Meanwhile, Adopt-A-Watershed is LANDBANK’s program, in partnership with the Department of Environment and Natural Resources (DENR), for the rehabilitation of denuded watersheds in different areas nationwide to contribute to the government’s National Greening Program. Now on its second year, World Water Day Awards recognizes individuals and institutions from the academe, government and non-government agencies, and the private sector that made “a difference in the area of water access and environmental sustainability.” The annual award-giving event served as the culminating activity of the World Water Day celebration in March. “People who work in water-related sectors are often not recognized for their efforts, and it is our intent to change that through the World Water Day Awards. Though only on its second year, the mission of this awards program is to give recognition to remarkable water professionals, whose work has created quite an impact not only in the industry, but also in our society,” Maynilad President and CEO Ramoncito S. Fernandez said. LANDBANK was nominated by DENR for the awards for the Bank’s CSR environmental efforts. 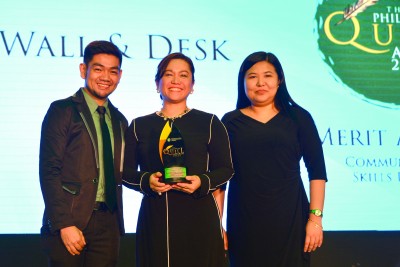 The LANDBANK 2015 wall and desk calendars titled “The Beauty that Lies Within: A Look at Philippine Caves” received the Award of Merit at the Philippine Quill Awards 2015 conferred by the International Association of Business Communicators.  The 2015 calendars won under the Communication Skills Division, Publications Category. The Philippine Quill is one of the country’s most prestigious awards for business communicators. This is the third award for the LANDBANK 2015 calendars. It won for Printwell, Inc., the 2015 wall calendar print service provider, the Print Excellence 2014 Award from Printing Industries Association of the Philippines, Inc.  It also won for Studio 5 Designs, Inc., the creative service provider, the Award of Merit for design from Graphis Publications, an international award giving body that recognizes the best in design, advertising, photography and illustration.

LANDBANK was adjudged a winner under the Outstanding Development Project- Environmental Development category of the ADFIAP Awards 2016 for its Talayan Sewage Treatment Plant project.

For the third straight year, LANDBANK was named as the top performing Government Securities Eligible Dealer (GSED) at the annual recognition ceremony hosted by the Bureau of the Treasury (BTr). The award recognizes the outstanding contribution of GSEDs in support of the local Government Securities (GS) market.

LANDBANK was named “Best Agribusiness Bank” in the Philippines by London-based Global Banking & Finance Review magazine for its financing programs that contribute to improving agricultural productivity, ensuring food security, and promoting agri-entrepreneurship, as well as for its initiatives to promote financial inclusion.Read more