LANDBANK is recognized by various award-giving bodies for its products, services, and CSR activities

LANDBANK Corporate Banking Group Head/Senior Vice President Ma. Celeste Burgos and Northern and Central Luzon Lending Group Head/Senior Vice President Filipina Monje receive the Certificate of Merit on behalf of the Bank from Karlsruhe Lord Mayor Frank Mentrup (leftmost) and European Organization for Sustainable Development CEO Arshad Rab (rightmost) during the Karlsruhe Sustainable Finance Awards 2017. For the fifth straight year, LANDBANK received a Certificate of Merit at the Karlsruhe Sustainable Finance Awards, this time for its “Ecosystem-Responsive (ER) Approach to Development Financing,” recognized under the Outstanding Sustainable Project Financing category. Conferred by the Global Sustainable Finance Network, the award recognizes long­term financing of outstanding projects that “benefit local communities, protect the environment, and ensure reliable returns to investors and lenders”. First of its kind among financial institutions in the country, LANDBANK’s ER fund-sourcing scheme was designed to ensure official development assistance funds reach and empower the poor, and reduce their vulnerability to financial distress, debt, and poverty. Included in this financing scheme are programs being implemented by LANDBANK with funding from the Japan International Cooperation Agency (JICA), the World Bank and the KfW of Germany (Kreditanstalt für Wiederaufbau). “This recognition is a validation that we are on track in helping reduce poverty by providing access to bigger funding sources for projects that promote sustainable development and inclusive growth,” LANDBANK President and CEO Alex Buenaventura said. The award was received by Corporate Banking Group Head/SVP Ma. Celeste Burgos and Northern and Central Luzon Lending Group Head/SVP Filipina Monje at the ceremony which was held as part of the annual Global Sustainable Finance Conference held in Karlsruhe, Germany. LANDBANK has consistently received various recognitions in the Karlsruhe Sustainable Finance Awards for the past five years, including Certificate of Merit - Outstanding Sustainable Project Financing Category (2013); Outstanding Business Sustainability Achievement award (2014); Certificate of Merit - Sustainable Financial Products and Services category for its Environmental Due Diligence system (2015); and Certificate of Merit - Best Innovation in Sustainable Financial Products and Services Category for the Climate SMART (Synergistic Mitigation, Adaptation, Resiliency, and Transformation) (2016). Karlsruhe Resolution Meanwhile, LANDBANK also signed the “Karlsruhe Resolution” which supports the United Nations-backed sustainable development goals (SDGs) and the Paris Climate Agreement (COP21), collectively referred to as “Agenda 2030” during the 7th Global Sustainable Finance Conference (GSFC 7) held on the same day. LANDBANK, represented by Corporate Banking Group Head/Senior Vice President Ma. Celeste Burgos (second from left), together with other delegates of the 7th Global Sustainable Finance Conference (GSFC 7) sign the “Karlsruhe Resolution” Over 200 delegates from more than 30 countries signed the resolution that stresses the important role of the financial services industry in achieving the aspirations of Agenda 2030 such as, among others, financing and investing in the implementation of SDGs and COP21 projects in their respective countries. The resolution also encourages governments and regulators to create policy frameworks that promote investments in innovation that will contribute in creating a green, inclusive, and sustainable economy. It also calls for a collective global action to ensure a level-playing field for all financial sector players. The crafting of the Karlsruhe Resolution was a joint undertaking of the European Organization for Sustainable Development (EOSD), the Association of Development Financing Institutions in Asia and the Pacific (ADFIAP), the Association of African Development Finance Institutions (AADFI) and the City of Karlsruhe.

BSP Governor and Monetary Board Chairman Nestor A. Espenilla Jr. and Monetary Board Member Juan D. De Zuñiga Jr. present the “Gold Hall of Fame Award” for the Credit Surety Fund category to LANDBANK President and CEO Alex V. Buenaventura and Executive Vice President for Agricultural and Development Lending Edward John T. Reyes at the 14th Awards Ceremony and Appreciation Lunch for BSP Stakeholders. For its outstanding contribution to the Credit Surety Fund (CSF) Program led by the Bangko Sentral ng Pilipinas, LANDBANK was conferred with the “Gold Hall of Fame” award in the 14th Awards Ceremony and Appreciation Lunch for BSP Stakeholders held recently at the BSP Complex in Manila. The Gold Hall of Fame is given to awardees that have won in the same category for three consecutive years. LANDBANK has been consecutively recognized as an “Outstanding Lending Bank” under the CSF category since 2013. “We are grateful for this recognition, which inspires us all the more to strengthen our support for the Credit Surety Fund program. We strongly share the program’s objective of making bank credit more accessible to MSMEs, who are our important partners for progress and development,” said LANDBANK President and CEO Alex V. Buenaventura. Initiated by BSP in 2008, the Credit Surety Fund is a credit enhancement scheme that aims to improve the bankability and credit worthiness of microenterprises and SMEs including cooperatives, which are short of collaterals and often face difficulty in obtaining loans from banks due to lack of collaterals, credit knowledge, and credit records. The fund is created by pooling cash contributions from participating cooperatives, local government units and other partner institutions. As of December 2016, LANDBANK has approved more than P3 billion in loans under the program, of which P1.8 billion was released to 35,373 CSF beneficiaries all over the country. Meanwhile, of the Bank’s approved contributions at P116.9 million, P90.3 million was released to 37 CSFs nationwide as of end-2016. LANDBANK also received awards for “Best CSF Lending Bank” and “Outstanding CSF Program Partner”.   Themed “Transforming Shared Visions into Dynamic Partnership”, the awards ceremony is a “tribute to institutions that have continuously supported the BSP’s statistical initiatives, information requirements, advocacy programs and the effective delivery of its function”. 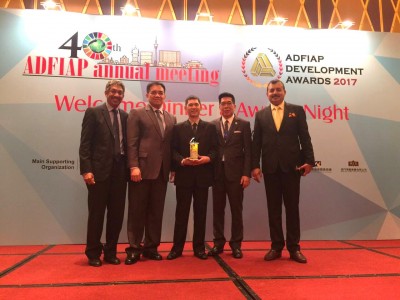 BSP Governor Amando M. Tetangco, Jr. (2nd from the left) and BAIPHIL President Liza L. Ortiz (2nd from the right), confer award to LANDBANK as Best Corporate Social Responsibility Project for Gawad Patnubay. LANDBANK Operations Sector Head/SVP Alan V. Bornas (center) received the award. Others in photo are BAIPHIL Chairperson of Special Projects Committee and Associate Life Member Maria Elena M. Ruiz (far left), and Chief Adviser of the Board Atty. Rhoneil S. Fajardo (far right). LANDBANK’s Gawad Patnubay Scholarship Program was adjudged as the Champion in the 2017 Best Corporate Social Responsibility (CSR) Project Award of the Bankers Institute of the Philippines, Inc. (BAIPHIL). This is the second award for the program after being named Outstanding Development Project – CSR Category by the Association of Development Financing Institution in Asia and Pacific (ADFIAP) in 2014. The Gawad Patnubay Scholarship Program, managed by LANDBANK’s Corporate Affairs Department, is a unique two-pronged scholarship program with an E2E Internship component for children of Agrarian Reform Beneficiaries (ARBs) taking up agriculture-related courses. The program covers the formal education or the four-year degree program in partnership with International Rice Research Institute (IRRI) and, informal education or skill-based training program in partnership with Pilipinas Association of Rural Families for Education and Development (PARFED). The E2E component is an internship program composed of a 10-week intensive internship where graduates will spend three weeks of lectures, seminars, and professional and personality development activities at the LANDBANK Head Office in Manila, and seven weeks of field work in LANDBANK or in different partner-institutions, such as the Philippine Rice Research Institution (PhilRice), Philippine Carabao Center (PCC), and HARBEST Agribusiness Corporation (HARBEST), etc., with the objective of securing agriculture-related jobs at the end of the program. LANDBANK established a unique funding scheme for the program wherein LANDBANK employees voluntarily donate a minimum of one hour’s worth of their salary during the last working day of the year. To date, a total of P14 million has been donated by LANDBANK employees nationwide. Since its inception in 2013, the Gawad Patnubay Scholarship Program has accepted 127 2nd to 4th year college students for both the formal and informal education programs, covering full subsidy for tuition fee, including monthly stipend, book allowance, thesis writing and uniform costs. A total of 22 scholars from the two batches of the formal education program have graduated and are now employed in LANDBANK and in other partner government and private institutions. With its initial success, the Gawad Patnubay Scholarship Program will be expanded to 17 more universities across the country starting this academic year 2017-2018, in line with its goal to encourage and equip more aspiring future agriculturists that can contribute in developing the agriculture sector of the country. LANDBANK Operations Sector Head and Senior Vice President Alan V. Bornas received the award on behalf of LANDBANK last March 11, during the closing ceremonies of BAIPHIL’s 29th National Convention in Tagaytay City. “This award is another affirmation of the positive impact of the Gawad Patnubay Scholarship Program, not only to the beneficiaries, but also to the effort to revive student interest in agriculture,” says Bornas.

LANDBANK Senior Vice President Ramon R. Monteloyola receives the award for “Most Socially Responsible Bank” from H.E. Dato’ Ilango Karuppannan, High Commissioner of Malaysia, Embassy of Malaysia in Singapore during the Annual IFM Awards 2016 in Singapore.  LANDBANK also received awards for “Most Innovative Lending Platform” for the LANDBANK Mobile Loan Saver and “Best CSR Initiative” for its Gawad KATUBIGAN program.   The Land Bank of the Philippines was named “Most Socially Responsible Bank” in the Philippines for 2016 by London-based International Finance Magazine (IFM) at the IFM Annual Awards held recently in Singapore. LANDBANK was recognized for its “strong commitment towards sustainable development and environmental protection” through the environmental due diligence (EDD) system for all projects financed by the Bank. IFM also awarded the LANDBANK Mobile Loan Saver as “Most Innovative Lending Platform” and the Bank’s Gawad KATUBIGAN program as “Best CSR Initiative”. Gawad KATUBIGAN provides calamity-hit communities with access to clean water through portable water filtration systems. Originally initiated as part of the requirements for World Bank-assisted projects, the EDD system was institutionalized by LANDBANK for all its financed projects, regardless of amount. LANDBANK established an Environmental Program and Management Department, which conducts the assessments of projects and provides the Bank’s lending units with an Environmental Assessment Report as a guide for the evaluation and approval of loan proposals. LANDBANK has reaped various other recognitions from local and international organizations for its EDD system, including the Green Leadership Award at the 2015 Asia Responsible Entrepreneurship Awards, the Sustainable Business Award from the Global Initiatives (Singapore) and Price Waterhouse Cooper Philippines, and the Outstanding Business Sustainability Achievement Award from the Global Sustainable Finance Network in 2014. The Bankers Institute of the Philippines also recognized LANDBANK as Green Bank Champion in 2013. The IFM Annual Awards recognizes individuals and organizations in the international finance industry that contribute to raising the bar in the financial services industry through innovative products or services, path-breaking initiatives in corporate social responsibility, better corporate governance, and other achievements that impact the global finance community.

The Land Bank of the Philippines was named “Most Socially Responsible Bank” in the Philippines for 2016 by London-based International Finance Magazine (IFM) at the IFM Annual Awards held recently in Singapore. LANDBANK was recognized for its “strong commitment towards sustainable development and environmental protection” through the environmental due diligence (EDD) system for all projects financed by the Bank. IFM also awarded the LANDBANK Mobile Loan Saver as “Most Innovative Lending Platform” and the Bank’s Gawad KATUBIGAN program as “Best CSR Initiative”. Gawad KATUBIGAN provides calamity-hit communities with access to clean water through portable water filtration systems.

The Land Bank of the Philippines was named “Most Socially Responsible Bank” in the Philippines for 2016 by London-based International Finance Magazine (IFM) at the IFM Annual Awards held recently in Singapore. LANDBANK was recognized for its “strong commitment towards sustainable development and environmental protection” through the environmental due diligence (EDD) system for all projects financed by the Bank. IFM also awarded the LANDBANK Mobile Loan Saver as “Most Innovative Lending Platform” and the Bank’s Gawad KATUBIGAN program as “Best CSR Initiative”. Gawad KATUBIGAN provides calamity-hit communities with access to clean water through portable water filtration systems.