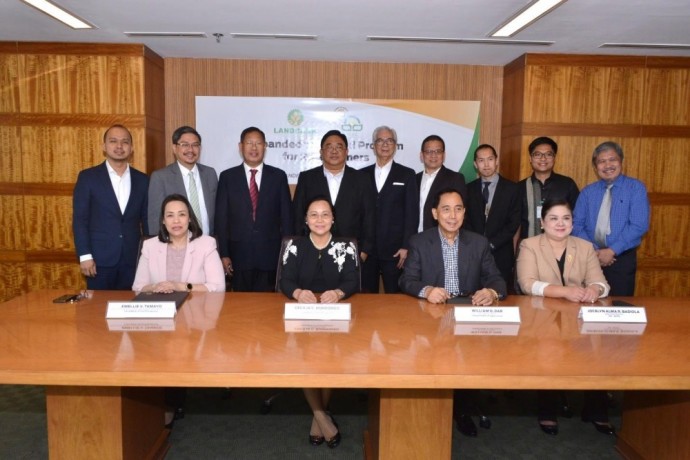 The Land Bank of the Philippines (LANDBANK) and the Department of Agriculture (DA), through the Agricultural Credit Policy Council (ACPC), signed on August 28, 2019 a Memorandum of Agreement (MOA) that would provide financial assistance to small farmers affected by the implementation of Republic Act No. 11203 also known as the Rice Tariffication Law (RTL).

Acting Agriculture Secretary William D. Dar and LANDBANK President and CEO Cecilia C. Borromeo led the signing of the agreement to implement the Expanded Survival and Recovery Assistance Program (SURE Aid) for Rice Farmers, which will provide an immediate one-time loan assistance of P15,000, payable in 8 years, to rice farmers who are tilling one hectare of land and below, and whose incomes were affected by the drop of prices of palay this year.

“We are trying to appraise the very predicament of the rice farmers affected by a complex set of issues, including the Rice Tariffication Law. But because of the falling prices of palay, we thought it necessary to look at every opportunity that is available for us. There are many more measures and this is one of them. We would like to get more ideas – measures that we need to implement right away,” said Secretary Dar, who is also Chairman of ACPC, an attached agency of DA.

Under the agreement, LANDBANK will implement the SURE Aid Program by releasing the loans either through direct lending to farmers or through service conduits. For its part, DA-ACPC will set aside P1.5 billion for the Program and provide the Bank with the validated list of farmers eligible for the loan assistance, as well as the list of DA-identified service conduits.

“We are very excited to be part of this very important Program that will cushion the initial impact of the lowering of the farm gate prices of palay because of the new rice tariffication regime. Please be assured that LANDBANK is fully on-board to work with you in making greater things happen for our farmers and fishers,” said President Borromeo.

She also thanked Secretary Dar for his “very swift and solid move,” which she said was a clear sign of many great things to come in the agriculture sector.

(left photo) Isabela Governor Rodolfo T. Albano, III (center) and LANDBANK Southern Isabela Lending Center Head, Vice President Bernard Bayangos (2nd from right) lead the turn-over of a grains complex to the Provincial Government of Isabela. ECHAGUE, Isabela — The Land Bank of the Philippines (LANDBANK) officially turned-over a grains complex located at Brgy. Ipil to the Provincial Government of Isabela in support of its Palay Procurement Program for small farmers.   The Province is leasing the grains complex from the state-run Bank with obligations to repair, rehabilitate and upgrade the facility, including the typhoon-damaged warehouse and rice mill buildings.  The grains complex is part of a P2-billion LANDBANK loan availed by the local government—of which P1 billion will be used as working capital for palay procurement, while the remaining P1 billion as standby credit for investment in equipment and machineries. “LANDBANK fully supports initiatives that provide small farmers a reliable source of income, including access to post-harvest facilities. We will also continue to service the development requirements of our local government partners towards food security, especially in the countryside,” said LANDBANK President and CEO Cecilia C. Borromeo. Through the Palay Procurement Program, Isabela Governor Rodito Albano III aims to boost the productivity and income of small farmers in the area, by offering an assured and reasonable price for their produce while stabilizing the price of palay in the local market. Around 16,667 small rice farmers from 34 municipalities, three (3) cities, and 1,055 barangays in the Province are targeted to benefit from the Program.  “Ang actual Return of Investment dito ay hindi yung kikitain ng probinsya. Ang kita ng probinsya rito ay yung tulong sa farmers, para at least stable lang yung prices. Ang pinakaimportante dito ay nakatugon tayo doon sa mga farmers,” said Gov. Rodito. LANDBANK remains the biggest lender to the agriculture sector, with loans reaching P257.94 billion as of May 2022. The agriculture loans have financed various economic activities of major players in the industry, including local government units (LGUs).  While expanding its focus to assist other key sectors and industries in the country, LANDBANK remains steadfast in fulfilling its primary mandate to deliver intensified support to the agriculture sector.

LANDBANK President and CEO Cecilia C. Borromeo (center), Sta. Cruz Mayor Edgar S. San Luis (2nd from right), and Provincial Government of Laguna Administrator Atty. Dulce H. Rebanal (rightmost) lead the inauguration of the LANDBANK Laguna Corporate Center in Brgy. Bubukal in Sta. Cruz, Laguna on 10 June 2022. Joining them are other local government officials, LANDBANK senior officers, and the Bank’s valued customers. STA. CRUZ, Laguna – In line with its commitment to provide convenient and accessible services, the Land Bank of the Philippines (LANDBANK) officially inaugurated a three-story corporate center in the Province of Laguna to serve as a one-stop shop for the banking and financing needs of local stakeholders and customers. Located in Brgy. Bubukal in Sta. Cruz, the LANDBANK Laguna Corporate Center houses the Bank’s major touchpoints and local offices to provide convenient access to a wide array of services. LANDBANK President and CEO Cecilia C. Borromeo, Sta. Cruz Mayor Edgar S. San Luis, and Provincial Government of Laguna Administrator Atty. Dulce H. Rebanal led the inauguration rites for the new corporate center on 10 June 2022. They were joined by incoming Cavinti Mayor Arrantlee R. Arroyo, incoming Paete Mayor Ronald B. Cosico, and LANDBANK Director Nancy D. Irlanda. Also present during the inauguration were LANDBANK Executive Vice Presidents Julio D. Climaco, Jr., Alex A. Lorayes, Liduvino S. Geron and Alan V. Bornas, together with Senior Vice Presidents Randolph L. Montesa, Althon C. Ferolino and Lucila E. Tesorero. “With the LANDBANK Laguna Corporate Center, we are looking forward to stepping up our support to the whole Province of Laguna. We hope that this will serve as a landmark for various economic activities and a catalyst to expand areas for collaboration in support of the Province’s key sectors,” said President and CEO Borromeo. The LANDBANK Sta. Cruz Branch on the ground floor of the building will service customers from the 26 barangays of Sta. Cruz, as well as the 176 combined barangays of the nearby municipalities of Cavinti, Kalayaan, Luisiana, Lumban, Magdalena, Majayjay, Pagsanjan, Paete, Pila, and Victoria.  The second floor houses the LANDBANK Laguna Lending Center to cater to the financing requirements of local farmers and fishers, micro, small and medium enterprises (MSMEs), cooperatives, and local government units (LGUs), among others. Other LANDBANK field offices stationed in the building include the Property Valuation and Credit Information Department–Laguna, Laguna Accounting Center I, and the Field Legal Services of Laguna.  The LANDBANK Laguna Corporate Center is situated in a less congested portion of the Sta. Cruz National Highway, and features a roomy interior and ample parking space to ensure a comfortable banking experience for customers.  LANDBANK currently operates a total of 19 branches and one lending center in Laguna, complemented by 86 automated teller machines (ATMs), and 17 Agent Banking Partners that provide basic banking services on behalf of LANDBANK in the unbanked and underserved areas of the Province. LANDBANK is the only bank present in all 81 provinces in the Philippines, with plans for continued expansion focusing on servicing the requirements of its diverse customer base nationwide.

Batanes Vice Governor Ignacio C. Villa, LANDBANK Senior Vice President Ma. Belma T. Turla, and other local government officials welcome the LANDBANK Basco Branch to its new home at the Ground Floor of the Manpower Development Center and National Agencies Building, Provincial Capitol Compound, Brgy. Kayhuvokan, Basco, Batanes. BASCO, Batanes – The LANDBANK Basco Branch recently transferred to a new and more strategic location to provide better banking services to small farmers and fishers, cooperatives, micro small and medium enterprises (MSMEs), local government units (LGUs) and other customers in all six (6) municipalities and 29 barangays in Batanes. From its former location at Santana Street in Barangay Kaychanarianan, the LANDBANK Basco Branch—the first and only LANDBANK Branch in the Province—officially transferred to the Provincial Capitol Compound in Barangay Kayhuvokan at the heart of the 5th class Municipality.  “Through the LANDBANK Basco Branch, we will continue to intensify our support for the development requirements of Batanes. We are one with the Provincial Government in advancing inclusive and sustainable growth in the province,” said LANDBANK President and CEO Cecilia C. Borromeo.  Batanes Vice Governor Ignacio C. Villa and LANDBANK Senior Vice President Ma. Belma T. Turla led the inauguration of the Branch in its new location on 06 June 2022. They were joined by Mahatao Mayor Pedro F. Poncio, Ivana Mayor Leonardo V. Hostallero, Itbayat Mayor Ronald V. Gutierrez, Sabtang Mayor Marcial Armando A. Alavado, Basco Vice Mayor German A. Caccam and LANDBANK Basco Branch Head Joseph L. Caliguiran. The LANDBANK Basco Branch will also cater to almost 1,500 beneficiaries of the Conditional and Unconditional Cash Transfer (CCT/UCT) Programs of the Department of Social Welfare and Development (DSWD), with two (2) Automated Teller Machines (ATMs) and one (1) Cash Deposit Machine onsite. LANDBANK also has three (3) Agent Banking Partners (ABP) covering the neighboring Municipalities of Sabtang, Itbayat, Uyugan, and Ivana to facilitate point-of-sale (POS) cash-out services on behalf of the Bank. Opening of deposit accounts in the LANDBANK Basco Branch is also made easier and more convenient with the Bank’s Digital Onboarding System (DOBS), which reduces account opening time to 15 minutes or less. “Sana ay ipagpatuloy ng LANDBANK ang suporta sa SMEs, farmers and fishermen, para sa tuloy-tuloy na pagpapaunlad ng ating kanayunan,” said Basco Vice Mayor German A. Caccam. The relocation of LANDBANK Basco Branch follows the recent inauguration of the new LANDBANK Real Branch in the Province of Quezon, the latest addition to the Bank’s network of 607 branches and 58 lending centers. The continued expansion of LANDBANK’s physical touchpoints underscores the Bank’s commitment of bringing banking services closer to unbanked and underserved areas nationwide, as part of its intensified efforts in advancing financial inclusion and in serving the nation.