Maximize the potential of you LANDBANK credit/ debit cards with these exciting promos! 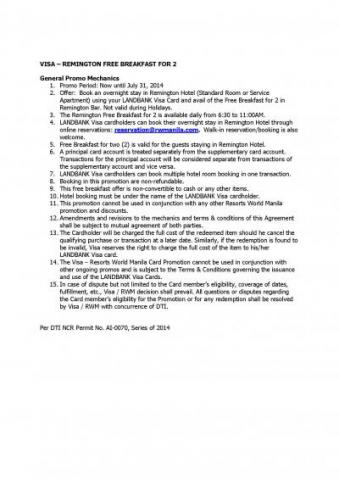 LANDBANK VISA PROMO - GET FREE BREAKFAST FOR 2 AT REMINGTON HOTEL 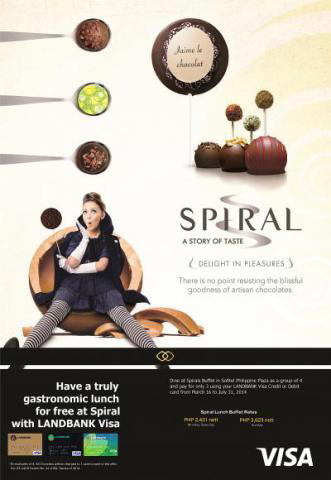 Enjoy A Gastronomic Treat At Spiral With VISA

LANDBANK Visa cardholders who will dine as a group of 4 shall pay for only 3 when they use their LANDBANK Visa Card at Spiral restaurant in the Sofitel Philippine Plaza from March 16 to July 31, 2014. Terms & Conditions ELIGIBILITY The promotion is open to all principal and supplementary holders of LANDBANK Visa Credit and Debit cards (“Cards”) ("Cardholders"). PROMOTION MECHANICS AND CONDITIONS The promotion commences on March 16, 2014 and ends on July 31, 2014(“Promotion Period”). All transactions must be made within the Promotion Period to avail of the Promotion. Offer: LANDBANK Visa cardholders can avail of a 3+1 (buy 3 get 1 free)offer on all buffet lunch at Spiral. Offer is valid for all days of the week (for lunch buffet only). There is no limit to the number of free lunches that can be availed. Cardholders may avail of 1 free lunch for every 3 paid lunches. The get one free offer is only available to a party of 4 or multiples of 4. All 3 lunch buffets have to be charged to one LANDBANK Visa card to avail of the free offer. A principal Card account is treated separately from the supplementary Card account. Transactions for the principal account will be considered separate from transactions of the supplementary account and vice versa. This promotion cannot be used in conjunction with any other Sofitel promotion and discount. Per DTI NCR Permit No A1-0184 series of 2014. 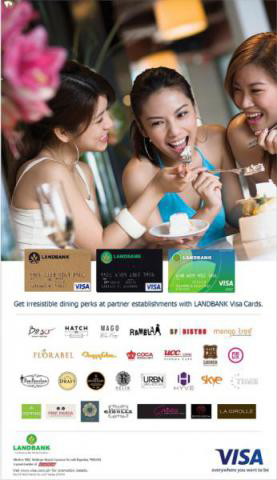 LANDBANK Visa cardholders may avail of exclusive offers ranging from discount to special privileges in selected dining merchants by simply using their LANDBANK Visa card from April 1 to August 31, 2014. For more information, please call our Customer Care Center at 405-7000. 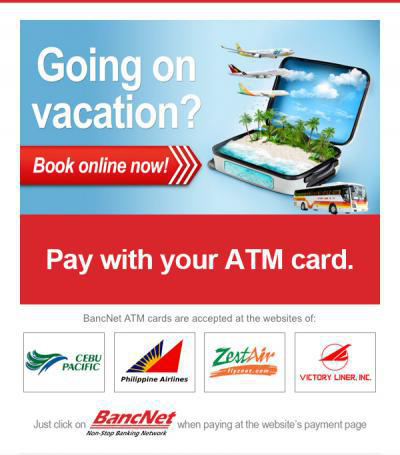 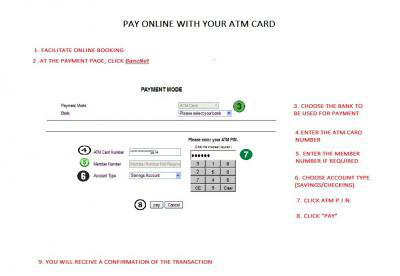 Step By Step Procedure Facilitate online booking At the payment page, click BancNet Choose the Bank to be used for payment Enter the ATM Card number Enter the member number if required Choose account type (savings/checking) Click ATM P.I.N Click "PAY" You will receive a confirmation of the transaction 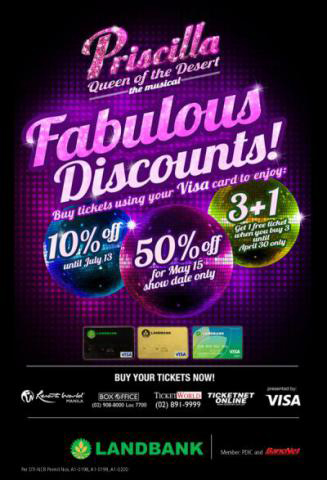 PRISCILLA, Queen Of The Desert The Musical 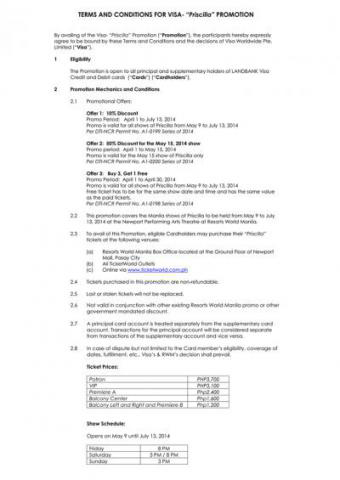 By availing of the Visa - "Priscilla" Promotion, the participants hereby expressly agree to be bound by these Terms and Conditions and the decisions of Visa Worldwide Pte. Limited (Visa). ELIGIBILITY The promotion is open to all principal and supplementary holders of LANDBANK Visa Credit and Debit card ("Cards") ("Cardholders"). PROMOTION MECHANICS AND CONDITIONS 1. Promotional Offers: Offer 1: 10% discount Promo Period: April 1 to July 13, 2014 Promo is valid for all shows of Priscilla from May 9 to July 13, 2014 Per DTI-NCR Permit No. A1-0199 Series of 2014 Offer 2: 50% discount for the May 15, 2014 show Promo Period: April 1 to May 15, 2014 Promo is valid for the May 15 show of Priscilla only Per DTI-NCR Permit No. A1-0200 Series of 2014 Offer 3: Buy 3, Get 1 Free Promo Period: April 1 to April 30, 2014 Promo is valid for all shows of Priscilla from May 9 to July 13, 2014 Free ticket has to be for the same show date and time and has the same value as the paid tickets Per DTI-NCR Permit No. A1-0198 Series of 2014 2. This promotion covers the Manila shows of Priscilla to be held from May 9 to July 13, 2014 at the Newport Performing Arts Theatre at Resorts World Manila. 3. To avail of this Promotion, eligible Cardholders may purchase their "Priscilla" tickets at the following venues: Resorts World Manila Box Office located at the Ground Floor of Newport Mall, Pasay City All TicketWorld Outlets Online via www.ticketworld.com.ph 4. Tickets purchased in this promotion are non-refundable. 5. Lost or stolen tickets will not be replaced. 6. Not valid in conjunction with other existing Resorts World Manila promo or other government mandated discount. 7. A principal card account is treated separately from the supplementary card account. Transactions for the principal account will be considered separate from transactions of the supplementary account and vice versa. 8. In case of dispute but not limited to the Card member's eligibility, coverage of dates, fulfillment, etc., Visa's & RWM's decision shall prevail. TICKET PRICES Patron - P3,700 VIP - P3,100 Premier A - P2,400 Balcony Center - P1,600 Balcony Left and Right and Premier B - P1,200 SHOW SCHEDULE Opens on May 9 until July 13, 2014 Friday 8PM Saturday 3PM/8PM Sunday 3PM 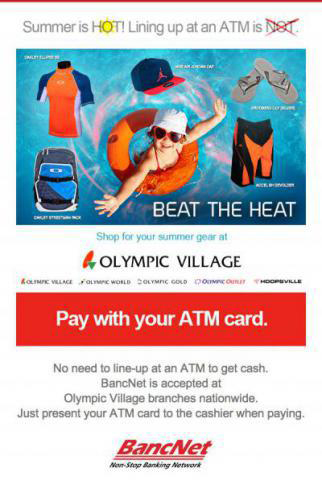 Beat The Heat This Summer

BancNet featured Olympic Village as one of the many establishments that accept BancNet ATM Cards for payment. No need to line-up at an ATM to get cash. BancNet is accepted at Olympic Village branches nationwide. Just present your ATM card to the cashier when paying.

PAY ONLINE WITH YOUR ATM CARD

SPIRAL BUFFET Pay for 3 buffet lunch and get 1 free. LA VERANDA Enjoy 35% off on your favorite drinks from 6 to 9 PM from Monday to Thursday. SNAPS SPORTS BAR Get 15% discount with a minimum consumption of P2,000 from Sunday to Thursday for lunch and/or dinner. Also enjoy 2 hours of billboards and foosball games. LE BAR Get a glass of sparkling wine to pair with your high tea set from 3 to 5 PM. For more information, you may call our Customer Care Center at 405-7000. 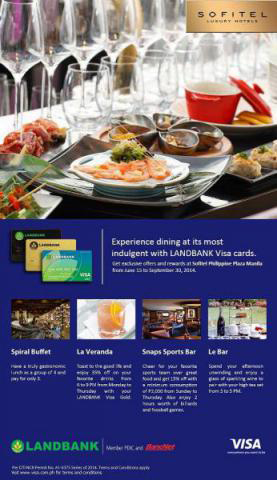 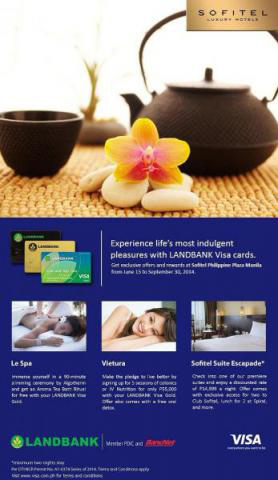 LE SPA A cardholder shall get an Aroma Tea Bath Ritual for free after a 90-minute slimming ceremony by Algotherm. VIETURA Sign up for 5 sessions of colonics or IV Nutrition for only P55,000 which also comes with a free oral detox. SOFITEL SUITE ESCAPADE Check into one of the premiere suites for a minimum of two nights stay and enjoy a discounted rate of P14,999 a night. Offer comes with exclusive access for 2 to Club Sofitel, lunch for 2 at Spiral and more. For more information, please call our Customer Care Center at 405-7000.