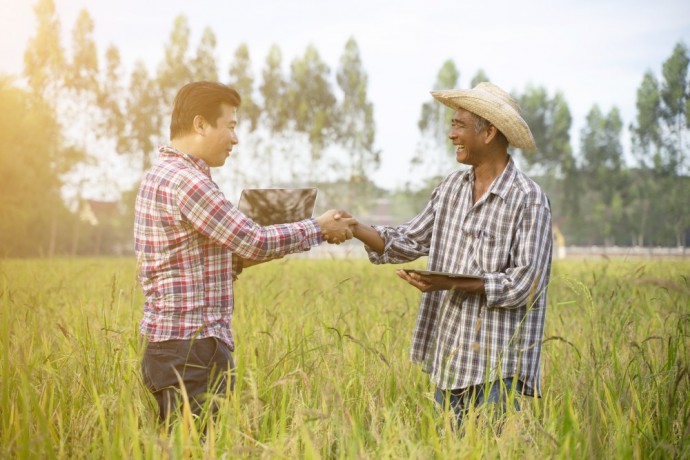 The Land Bank of the Philippines is further expanding its retail lending programs as it intensifies its support for small farmers and fishers.

“As we seek to reach more farmers nationwide, we are heavily focusing on making retail loans accessible, especially to those who are not members of associations or cooperatives and are unable to obtain loans from  formal lending institutions on their own,” said LANDBANK President and CEO Cecilia C. Borromeo.

While it continues to channel financing support to the sector through partner conduits such as farmers and fishers’ cooperatives, irrigators’ associations, and countryside financial institutions, the Bank is aggressively strengthening its retail lending programs to provide more individual borrowers with direct access to credit.

A newly-enhanced direct lending program is the Accessible Funds For Delivery to Agrarian Reform Beneficiaries (AFFORD-ARBs) Program, which will specifically cater to ARBs engaged in production of rice, corn, and high-value crops. The loan can also be used for the acquisition of small farm implements.

The Program is a partnership with the Department of Agrarian Reform, which will provide the Bank with a list of ARBs and mobilize borrowers for loan orientation and financial literacy seminars prior to loan release to ensure ARBs are equipped with the basic knowledge to manage their finances and learn about farm planning and budgeting.

LANDBANK also implements the Empowering Barangays in Remote Areas through Credit and Enterprise (EMBRACE), a direct lending program with relaxed features and requirements for small farmers and fishers, as well as microenterprises and small enterprises (MSEs) in unserved municipalities. Eligible projects include agricultural crop, livestock, and fishery production, as well as agri-enterprise and other livelihood projects.

LANDBANK also continues to strengthen its partnership with the Department of Agriculture as it implements retail lending programs for farmers, in pursuit of the government’s thrust towards improved agricultural productivity.

A continuing partnership with DA is on the implementation of the Agricultural Competitiveness Enhancement Fund (ACEF) – a special purpose fund which aims to increase the productivity of individual farmers and fishers, and their cooperatives and associations, as well as MSMEs, through credit assistance. Since the Program was launched in 2018, LANDBANK has already released P96.6 million in loans to 172 borrowers, which helped finance their crop production requirements and purchase of agri-machineries, equipment, and facilities.

In line with the implementation of the Rice Tariffication Law, the Bank also works with DA on the Expanded Rice Credit Assistance under the Rice Competitiveness Enhancement Fund. LANDBANK and the Development Bank of the Philippines will each make P500 million in credit assistance available to small palay farmers. The financing assistance will come with minimal interest rate and minimum collateral requirements.

LANDBANK also continues to implement the Sikat Saka Program, which provides direct credit and integrated support services to small palay and corn farmers who are members of Irrigators Associations or endorsed by Farmers Organizations. Sikat Saka covers 45 major rice-producing provinces and 11 corn-producing provinces in the country.

Since its launch in 2012, the Program has already benefited 16,174 small farmers, with cumulative loan releases at P8.535 billion as of end-April.  Outstanding loans of 9,630 farmers as of the same period amounted to P909.93 million.  Farmer-borrowers are likewise trained on credit discipline and financial management to teach them how to save, pay loans on time, and better manage their finances.

Also a continuing program is the Socialized Credit Program under the Sugarcane Industry Development Act (SIDA) – a direct lending program funded by the Sugar Regulatory Administration specifically targeted at individual sugarcane farmers, block farms, and common service centers. As of April 2019, the Program has so far benefited 276 borrowers, with cumulative loan releases amounting to P27.738 million.

“We continue to place utmost priority on providing responsive and relevant programs, especially to our priority sectors, as we work towards promoting growth that is inclusive and sustainable, especially in the countryside,” Borromeo added.

Apart from credit support, LANDBANK also provides technical assistance such as financial literacy and capability-building seminars to make sure borrowers are equipped with basic financial knowledge that will allow them to optimize their loans to improve their income and boost their productivity.

In partnership with the Department of Social Welfare and Development (DSWD), the Land Bank of the Philippines (LANDBANK) continues to deliver timely financial assistance as it released P89.45 billion in cash grants that benefitted 6.3 million lowincome families as of the first nine months of 2021. Of the total releases, P82.72 billion in cash grants were distributed to 4.4 million beneficiaries under the government’s Conditional Cash Transfer (CCT) Program, intended to support poor households with children aged 18 years old and below. The remaining P6.73 billion was released to 1.9 million beneficiaries under the DSWD’s Unconditional Cash Transfer (UCT) Program, as part of support interventions in line with the implementation of the Tax Reform for Acceleration and Inclusion (TRAIN) Law. “LANDBANK remains one with the National Government in the immediate delivery of social protection interventions and much-needed financial relief to vulnerable sectors. Under the whole-of-nation approach, we work closely with the DSWD and other government partners at the forefront of extending responsive and impactful services,” said LANDBANK President and CEO Cecilia C. Borromeo. The Bank also continues to distribute LANDBANK cash cards to CCT and UCT beneficiaries to make receiving and accessing benefits easier and more convenient. The cards can be used for cash withdrawals at LANDBANK ATMs and Agent Banking Partners, and for cashless purchases in groceries and drugstores, among others. As of 30 September 2021, LANDBANK has produced 6.4 million cash cards for this ongoing partnership, of which 4.4 million cards are already being utilized by the beneficiaries. CCT and UCT beneficiaries may also receive their benefits via over-thecounter transactions at LANDBANK branches and through various conduits. LANDBANK is relentless in fulfilling its expanded mandate as the delivery arm for the National Government’s social protection initiatives, in line with serving the Filipino people and the nation at large.

The Land Bank of the Philippines (LANDBANK) has made investing in the Bureau of the Treasury’s (BTr) 26th tranche of Retail Treasury Bonds (RTB-26) more accessible with the LANDBANK Mobile Banking App (MBA). The RTB-26 is a five-and-a-half-year bond with a coupon rate of 4.625% per annum designed for retail investors as a low-risk and higher-yielding savings instrument. Proceeds of the offer that is expected to reach P30 billion will support the National Government’s ongoing pandemic response initiatives and priority projects, among others. Through the LANDBANK MBA, interested investors can purchase RTB-26 for as low as P5,000 and in multiples of P5,000 thereafter in as fast as five minutes. This feature is also available in the Mobile Banking App of the Overseas Filipino Bank (OFBank), the official digital bank of the Philippine government and a subsidiary of LANDBANK. “We are once again inviting the investing public to support the BTr’s latest Retail Treasury Bond offer now made more convenient through LANDBANK’s digital platforms. Investors can purchase this affordable and low-risk investment in five minutes, and at the same time contribute directly to advancing the country’s ongoing economic recovery,” said LANDBANK President and CEO Cecilia C. Borromeo. Investors can also make online placements for RTB-26 through the BTr’s Online Ordering Platform then settle their payments via the LANDBANK Link.BizPortal. Over-the-counter placements are also accepted in all LANDBANK branches nationwide. The offer period for RTB-26 is until 26 November 2021, which includes a bond exchange offer where holders of Fixed-Rate Treasury Notes (FXTNs) 10-54 and 5-74 can swap their holdings for the new bond offering. The RTB-26 follows the RTB-25 issuance last March which raised P463.32 billion, of which LANDBANK generated 27% or a total of P124.39 billion. It also immediately comes after the highly successful first onshore retail dollar bond (RDB) issue in September that raised $1.6 billion for the national government, of which LANDBANK contributed US$205.27 million of total sales. LANDBANK serves as the Joint Lead Issue Manager for the RTB-26 offering, in line with promoting greater financial inclusion and inclusive national development.

Lagayan Mayor Edmarc L. Crisologo (2nd from left) and LANDBANK Ilocos Sur Lending Center Head Loida Arlene Ringor (3rd from left) lead the signing of a P60-million loan to finance various infrastructure projects for the Municipality. They are joined by Vice Mayor Apolinar Molina, Sr. (4th from left), Municipal Treasurer Jesus B. Dalangin (rightmost), and LANDBANK Account Officer Richard A. Refuerzo (leftmost). LAGAYAN, Abra – The Land Bank of the Philippines (LANDBANK) and the Municipal Government of Lagayan in Abra province recently signed a P60-million loan to finance development projects to boost the local economy. Facilitated by the LANDBANK Ilocos Sur Lending Center, the 15-year term loan will finance the rehabilitation of a municipal road between barangays Pulot and Poblacion, to significantly improve the movement of goods and the public within the municipality. The road serves as the main route linking all four of Lagayan’s barangays and connects the town to other adjacent municipalities. The municipal road is seen to benefit Lagayan’s 4,617 residents, including 850 farmers and 625 fishers, and allows them to travel more safely and efficiently, especially when transporting agricultural goods to markets in nearby municipalities. The road will also support increased tourism activity within the municipality. Local tourist attractions in Lagayan include the caves in Mount Gaco, Lusuac Sprint Resort, and whitewater tubing or bamboo rafting near Ar-Arbis Falls. The P60-million LANDBANK term loan will also cover the purchase of a payloader to be used mainly in dredging the Palsuguan and Tineg rivers traversing Lagayan. This is part of the LGU’s efforts to prevent floods in rice fields and barangays caused by the natural build-up of debris and rising waters resulting from monsoon rains. To further control seasonal flooding, the LGU will also use part of the LANDBANK loan to put up a drainage canal system in Barangay Poblacion to improve water drainage for the health and safety of residents. “LANDBANK remains a ready and able partner of LGUs nationwide for various recovery and development initiatives. We will continue to serve local communities to spur economic activity, growth, and recovery,” said LANDBANK President and CEO Cecilia C. Borromeo. Lagayan Mayor Edmarc L. Crisologo expressed his appreciation for LANDBANK’s financial support, which will also bankroll the construction of a Legislative Building and the rehabilitation of the municipality’s Evacuation Center to be able to accommodate more evacuees, especially during disasters. The Center will also serve as the operations hub for the Municipal Disaster Risk Reduction Management (MDRRM). “May we continue and strengthen our partnership towards the success of every Lagayano’s dream. On behalf of my constituents, I am in deep gratitude for the helping hand extended by LANDBANK and the realization of the vision, dreams, and aspirations that Lagayanos have been longing for a long time now,” said Mayor Crisologo. As of end-October 2021, LANDBANK has extended P62.06 billion in outstanding loans to LGUs nationwide. Of this amount, P22.96 billion financed various agri-aqua projects, including P5.82 billion and P5.23 billion for transportation and health-care initiatives, respectively.