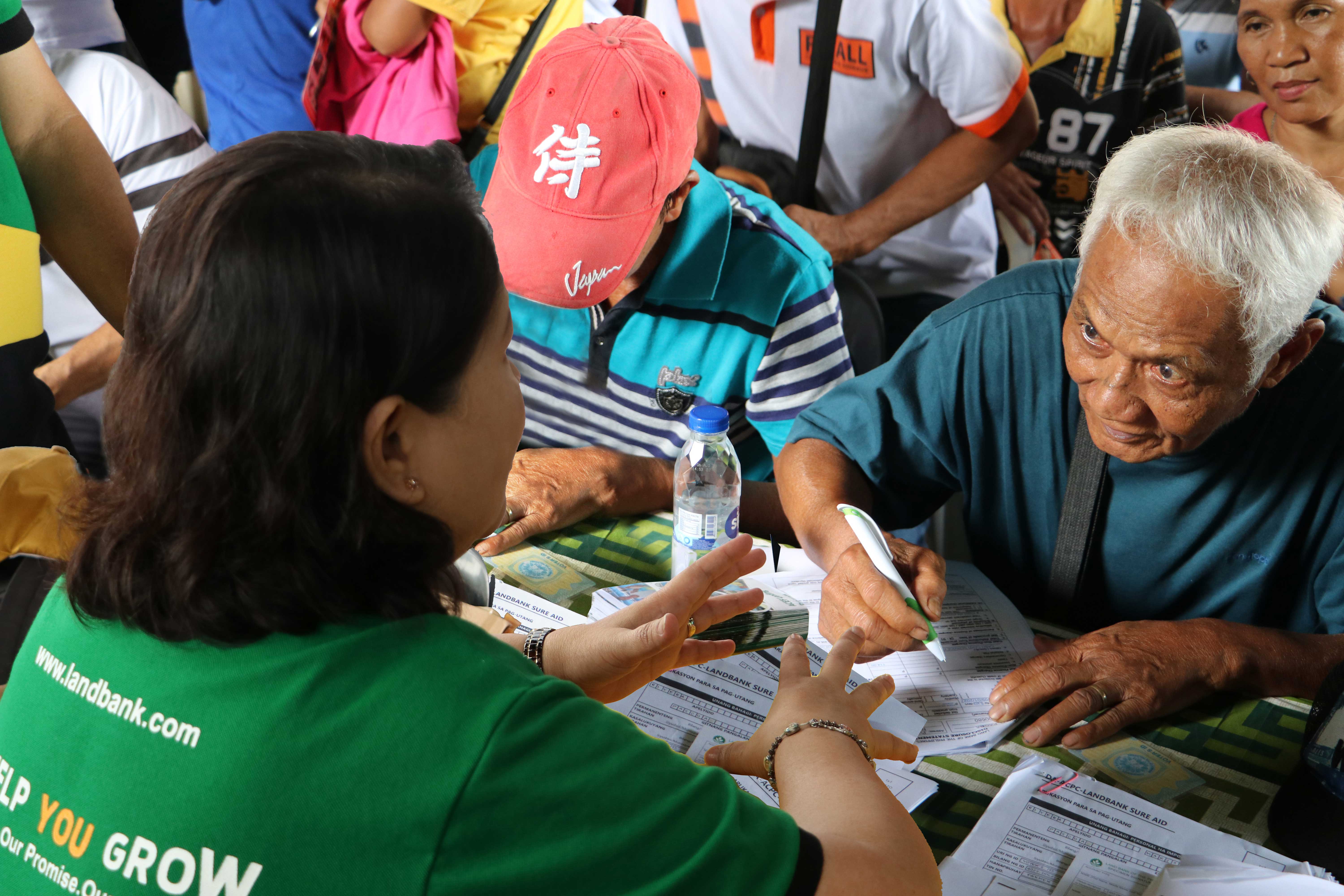 The Land Bank of the Philippines is taking steps to make its direct lending programs more accessible and affordable for small farmers and fishers (SFFs), in line with its aggressive drive to intensify support to the sector.

“We understand that applying for loans can be intimidating, especially for small farmers and fishers, so we have started making basic improvements in our processes to make it easier for them to avail of loans,” said LANDBANK President and CEO Cecilia C. Borromeo.

Among the basic enhancements which the Bank made is the simplification of the loan application form, which has been condensed into one document – from what used to be three separate documents (i.e. Application Form, Sworn Statement/Attestation, and Data Privacy Consent). Completing the form is also now more straightforward with mostly tick boxes, to make it easier for farmers and fishers. The promissory note which used to be a 14-page document has also been simplified and shortened to one page.

Basic documentary requirements have likewise been trimmed down. SFF borrowers of the Agricultural Competitiveness Enhancement Fund (ACEF) Lending Program, for instance, will only need to submit a loan application form, a simple farm plan, and barangay clearance.

The Bank also made its programs more affordable by standardizing the interest rates at 5% per annum for most direct lending programs for SFFs. These include the Accessible Funds for Delivery to Agrarian Reform Beneficiaries (AFFORD-ARBs) Program, which provides loans to finance production of rice, corn, and high-value crops, as well as the acquisition of small farm implements.

Retail lending programs for SFFs that the Bank administers for the Department of Agriculture also now have interest rates fixed at 2% p.a. These include the ACEF Lending Program and the Socialized Credit Program under the Sugarcane Industry Development Act (SCP-SIDA) funded by the Sugar Regulatory Administration.

Also available at an interest rate of 2% p.a. is the Expanded Rice Credit Assistance under the Rice Competitiveness Enhancement Fund (ERCA-RCEF). Under the Program, LANDBANK will lend up to P500 million annually for the next six years to rice farmers registered in the Registry System on Basic Sectors in Agriculture or RSBSA, and to DA-accredited cooperatives. For on-lending by cooperatives under ERCA-RCEF, interest rate is at 0% p.a., as long as effective pass-on rate to end borrowers is not higher than 6% p.a.

Processing of loan applications is also quicker – with average turn-around time of just one day as against the maximum 10-days commitment to the Governance Commission for GOCCs. This is provided that the borrower submitted complete documents and credit/background investigation is favourable.

“This is just the beginning as we are actively looking for ways to further improve the loan application process for our farmer and fisher borrowers. Through these efforts, we hope to encourage them to go to LANDBANK instead of borrowing from informal lenders who charge significantly higher rates,” Borromeo added.

LANDBANK President and CEO Cecilia Cayosa Borromeo (3rd from left) and Lake Sebu Countryside Development Multipurpose Cooperative (MPC) Vice Chairman Felimon Elloran (leftmost) lead the signing of the Memorandum of Agreement to officially tap the cooperative as an Agent Banking Partner of LANDBANK in the municipality. Joining them are MPC Manager Rosie Makilan (2nd from left), and LANDBANK Senior Vice President Leila C. Martin (rightmost). LAKE SEBU, South Cotabato – The Land Bank of the Philippines (LANDBANK) has tapped the Lake Sebu Countryside Development Multipurpose Cooperative (MPC) to serve as its Agent Banking Partner in this underserved municipality, as part of the Bank’s mandate to advance greater financial inclusion in the country. As a LANDBANK Agent Banking Partner, the Lake Sebu Countryside Development MPC will now offer basic banking services, such as card sale, cash-in, cash-out, fund transfer, and bills payment, as well as other services that may be offered by LANDBANK in the future. The cooperative will also service the cash requirements of around 13,700 beneficiaries of the National Government’s Conditional Cash Transfer (CCT) Program in the area, who previously had to travel to the municipality of Surallah to withdraw their cash grants.  “Our MOA signing represents a big step in providing access to banking services to the unbanked municipality of Lake Sebu. As we deliver our services closer to our customers here, we are also allowing them to enjoy lower transaction costs and save on travel expenses,” LANDBANK President and CEO Cecilia Cayosa Borromeo said. President Borromeo and Lake Sebu Countryside Development MPC Vice Chairman Felimon Elloran led the signing of the Memorandum of Agreement to formalize the partnership on 20 January 2023 at the Punta Isla Lake Resort in Lake Sebu. They were joined by the cooperative’s Manager, Rosie Makilan, and LANDBANK Senior Vice President Leila C. Martin. Under its Agent Banking Program, LANDBANK initiates partnerships with client cooperatives, associations, rural banks, local government units (LGUs), micro, small and medium enterprises (MSMEs), and private entities to help provide basic banking services to areas with limited or no Bank presence.  As of 31 December 2022, LANDBANK has a total of 1,056 Agent Banking Partners nationwide, covering all 82 provinces and 827 municipalities. This includes 206 unbanked municipalities based on the list of the Bangko Sentral ng Pilipinas (BSP) as of December 2021, and 621 underserved municipalities or with limited LANDBANK presence.  The LANDBANK Agent Banking Program is in compliance with Bangko Sentral ng Pilipinas (BSP) Circular No. 940 series of 2017, wherein banks are allowed to serve customers through cash agents contracted to perform selected banking services on its behalf in order to exponentially expand its reach and serve customers more efficiently.

LANDBANK Visayas Lending Group Head, Senior Vice President Elsie Fe NB. Tagupa (3rd from left) and Western Visayas Transport Cooperative (WVTC) Chairman Raymundo G. Parcon (4th from left) lead the loan signing for the purchase of 95 modern jeepneys on 19 January 2023 at the Richmonde Hotel in Iloilo City. ILOILO CITY – Some 95 additional new modern jeepneys will start plying the city’s streets in February 2023 after the Land Bank of the Philippines (LANDBANK) and Western Visayas Transport Cooperative (WVTC) signed a loan contract for the acquisition of brand new and environment-friendly public utility jeepneys (PUJs).  LANDBANK Visayas Lending Group Head, Senior Vice President Elsie Fe NB. Tagupa and WVTC Chairman Raymundo G. Parcon led the loan signing on 19 January 2023 at the Richmonde Hotel in Iloilo City. They were joined by WVTC General Manager Halley T. Alcarde and other co-op members, alongside LANDBANK Iloilo Lending Center Head, Assistant Vice President Giovani T. Baoy and other Bank officers.  The WVTC’s modern jeepneys will provide a convenient, safe, and comfortable commuting experience for Ilonggos in 13 routes in Iloilo City. The units will be equipped with air-conditioning, closed-circuit television (CCTV) systems, Wi-Fi connectivity, Global Positioning System (GPS), and a cashless payment system, among others. More than the safety and convenient features, modern jeepneys have minimal impact on the environment as these will be compliant with the European emission standards for globally-accepted vehicle exhaust emission limits. “LANDBANK remains committed to supporting the National Government’s agenda towards building a modernized transport system. We stand ready to assist more transport cooperatives and corporations nationwide to make the shift to safer and more efficient vehicles,” said LANDBANK President and CEO Cecilia Cayosa Borromeo.  LANDBANK’s financing for the purchase of modern jeepneys will also provide a sustainable source of income to over 700 operator and driver-members of WVTC, who were previously at risk of losing employment with the planned phaseout of old jeepneys. “Nagpapasalamat kami sa LANDBANK sa tiwala at tulong nito sa aming kooperatiba. Pumupunta sila sa aming opisina at talagang ginagabayan kami para matapos ang mga loan requirements. Sana magpatuloy pa ang tulong sa amin ng LANDBANK upang patuloy naming maserbisyuhan ang mga commuters sa Iloilo City,” said WVTC Chairman Parcon. The WVTC was formed in 2017 to comply with the Department of Transportation’s (DOTr) order to convert various associations of operators and drivers into a cooperative to operate modern PUJs. In April 2022, the cooperative was granted a franchise by the Land Transportation Franchising and Regulatory Board (LTFRB) to operate more than 550 units plying 13 routes in Iloilo City. The co-op plans to seek LANDBANK’s assistance again to fund its remaining approved units.  The modern jeepneys of WVTC are financed under the LANDBANK SPEED PUV (Special Package for Environment-Friendly and Efficiently-Driven Public Utility Vehicles) Program, which directly supports the Public Utility Vehicle Modernization Program (PUVMP) spearheaded by the DOTr and LTFRB.  As of 31 December 2022, LANDBANK has approved P6.3 billion in loans to 138 transport cooperatives and corporations nationwide under the Program for the acquisition of over 2,860 modern jeepneys. Of this number, the Bank has extended P751.2 million to 10 borrowers from Iloilo to finance a total of 334 units.